A day in Sun City

The best thing about South Africa is it’s diverse blend of travel destinations. From safari velds to  the mountain tops , the oceans and our luxurious mythical African kingdom in Sun City – there is enough room to suit travelers of all kinds around the world.

My recent trip to Sun City had me falling head over heels with this country.  Sun City is a holiday resort situated in the North West Province in South Africa and it is indeed a world within one city. In this resort you get a beach (man made), a casino, five star hotels, game drives, theme parks, a mall , shopping centers, and a Palace! To my understanding that’s a kingdom on its own. I spent my last 25th birthday weekend celebration at this resort with my friends which was the best birthday to date!

This was my first trip to Sun City and it has already claimed a spot in my top travel destinations in South Africa.

To say the place is beautiful is an understatement. When you enter into the Valley of the Waves you are welcomed by the mighty wild life sculptures that transcend through out the resort. This gives you a feel of the African kingdom.

As a beauty pageant enthusiast and former ambassador, I  associate Sun City with the Miss South Africa pageant because every year this is where we crown our queens. It just so happend that the pageant was taking place during the time we were there, but we missed it because we left on the day of the event.

In this post I want to share a simple itinerary plan for when you plan your first or next trip to Sun City because if you’ve never been there it can be quite daunting as there is a lot to discover.  Luckily one of my friends had been there several times , so she knew more about the place which helped us a lot.

You need to make sure that you have your own transport to the resort especially if you are driving from the airport or from a different city. We were coming from three different cities and we met in Jo’burg so that we could travel in one car to save on petrol (and carbon emissions – save the planet!). Luckily the resort has its own shuttle service such as buses and trains that transport you from the parking area into the magical land and to any place in the resort.

Initially I had planned to stay in one of the 5 star hotels near the  resort, but because of the Miss South Africa weekend, bookings got full quickly. We then used booking.com and found a reasonably priced hotel at Orion Safari  which was 40 minutes away from the resort and it worked out cheaper compared to the price we were going to pay at the resort.

So try to book early and use booking.com. The further you book from the resort, the cheaper the price.

Unless you are from the North West province, then accommodation is not a problem. But if your are traveling from outside this province or the country then you definitely have to book a hotel.

3) Make sure you plan the day from start to finish

We checked into our hotel on Friday  evening, had dinner and a good nights rest after the long drive. In the morning we got up early to  get ready and we started of with a buffet breakfast at our hotel. I cannot describe how much I ate and I wanted to try everything (haha – a girl must eat you know).

This was by far the best breakfast I had had in 2017. I wish I could upload a video of the chef preparing my omelet, it was a mouth watering spectacle I can never erase.  The dessert? Out of this world. I’m not a big fan of sweet stuff, but I did go a bit over board on our dessert during breakfast.  Who wouldn’t?

We ate everything and filled up as much as we could in order to save on lunch and make room for our high tea later (call it eating on a budget).

right?). It was more like a promise of a good day. Please remember to take spares of clothing, and sunscreen – you don’t want to walk out there looking like you came out of an earth quake after the rides.

Another tip is to make sure to budget well. Expect to pay a general entry fee into the resort and another fee to go on all the fun rides. (I literally went on every ride lol).

We also made a high tea reservation at the Palace for 15h30 , so we had to spend our time wisely. I didn’t get to take pictures of the water slides because we locked our phones in the lockers to keep our belongings safe.

We passed through the mall near Soho Hotel on our way to the  rides and I was fascinated by these chandeliers  that almost look like 3D polka dots. I couldn’t help but look up in awe. I felt like a little girl discovering Disneyland for the first time.

This was me sitting on a rock by the valley of the waves. How gorgeous it this place? I also had a chance to swim in that ‘beach’ and it was so much fun.

The Palace of the Lost City

Last on my simple Sun City  itinerary  is the Palace of the Lost City which is set on the highest ground in Sun City. I wanted a separate paragraph to highlight my high tea experience at this magical palace and to hopefully show you how worthwhile it is.

The Palace is inspired by the myth of a lost African kingdom. The situated nature of this palace on high ground ensures that its grand proportions and graceful towers are visible from across the resort.

Sun City is also  where the movie Mr Bones was shot  in 2001 starring international actors such as David Ramsey and Faiozona Love.

I had to sit here and take a picture, because it somehow looked similar to the Roman  Colosseum in shape and its features (I dream of visiting Rome one day and pining it to my diaries).

Entry into the Palace

We were welcomed by the mighty sculpture of the elephant again, which was fascinating. Stepping onto this territory felt like entering the Roman Empire buildings and being ushered in by the roman senator dressed in a tunic.

This  sculpture is one of the magnificent seven sculptures carved by Danie de Jager.

When you enter into the Palaace, you get lost in this view stepping into the lobby. It truly is a mythical African kingdom with its graceful architecture, finished with  tiled mosaics. 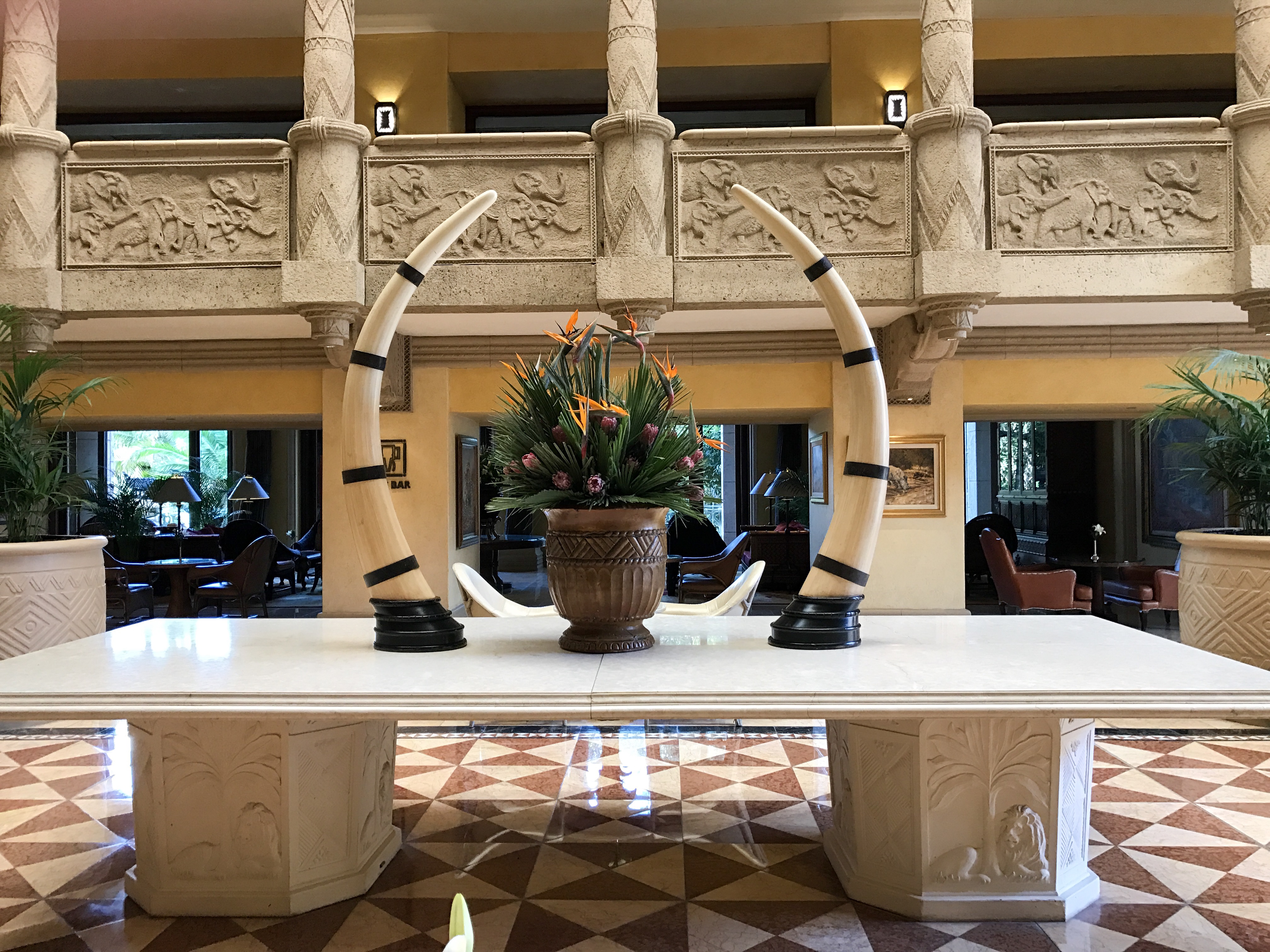 5) High Tea at the Palace 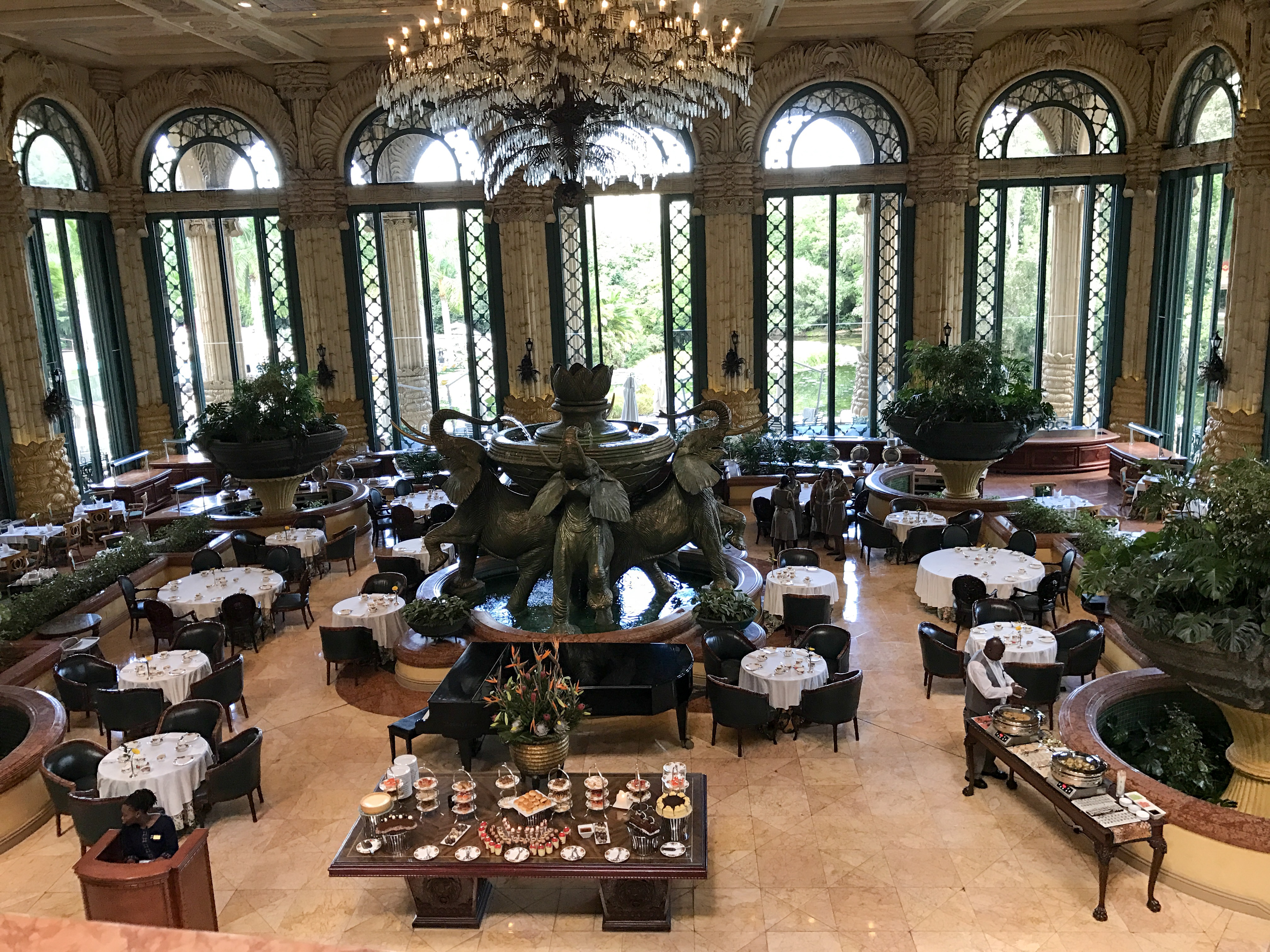 This was the cherry on top ,  I think it might have been my first time  having high tea at a five star hotel. The price was pretty decent given that we had so much dessert, savories to eat and bottomless teas to try out , the thought of it just makes me drool.

When you step into this luxurious palace, you already feel excited about what you are going to witness.  You anticipate your high tea experience just by looking at the classy stairways, the decoration and the beautiful interior ceiling finished with marble and chandeliers. I was so excited to try out the different teas because I enjoy drinking tea so much and I wanted to broaden my knowledge of it. 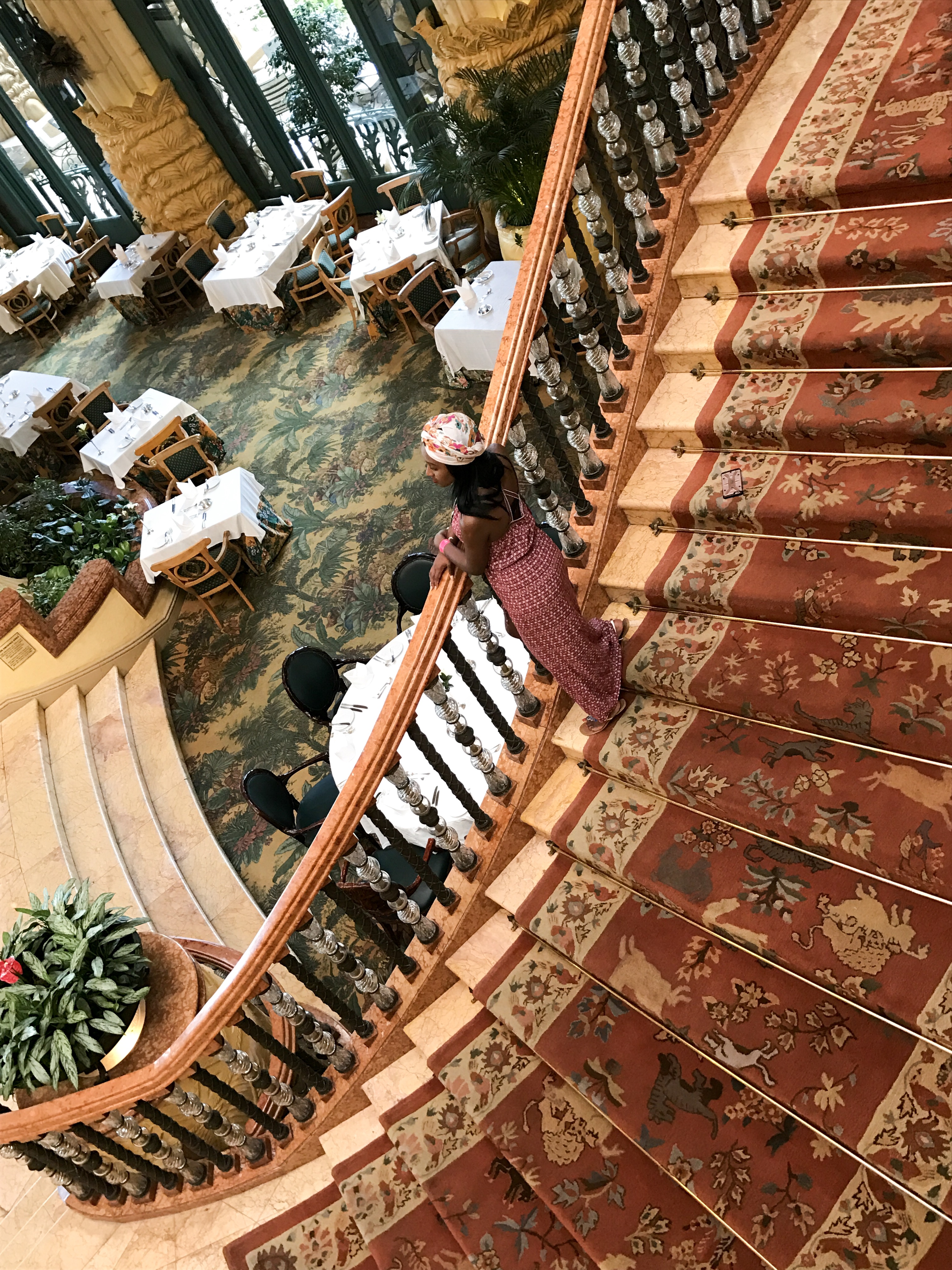 The decor was so beautiful, I was even afraid to sit on the table. I just kept on thinking that this should be my life everyday. Definitely an experience fit for a crown birthday. 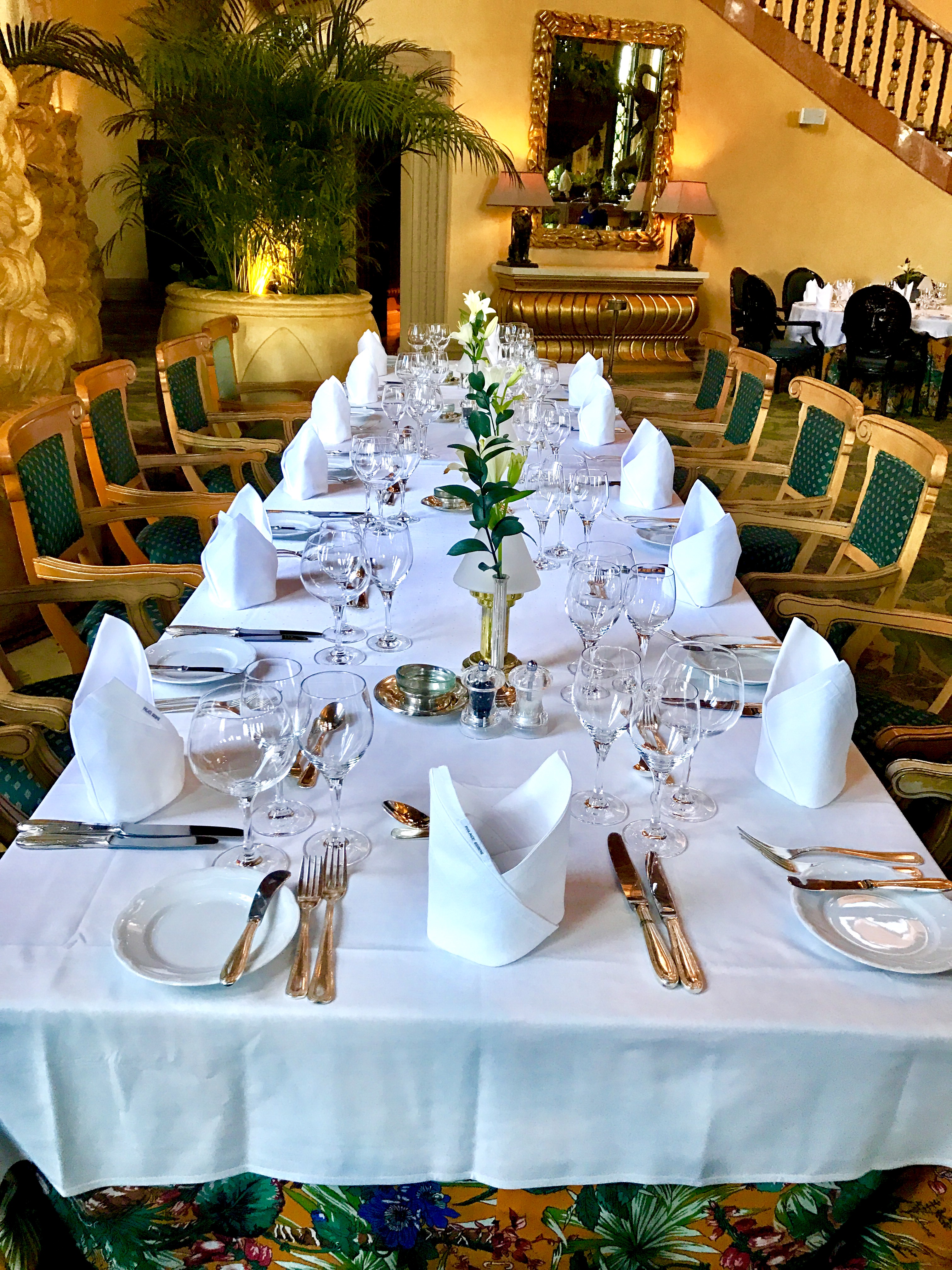 We were given a book with all the different kinds of teas. From green tea, blue tea, rooibos, and some  teas that I could not pronounce. I was basically in Tea Paradise. My favourite was the chocolate tea which had a cocoa aroma and it went so well with the dessert. 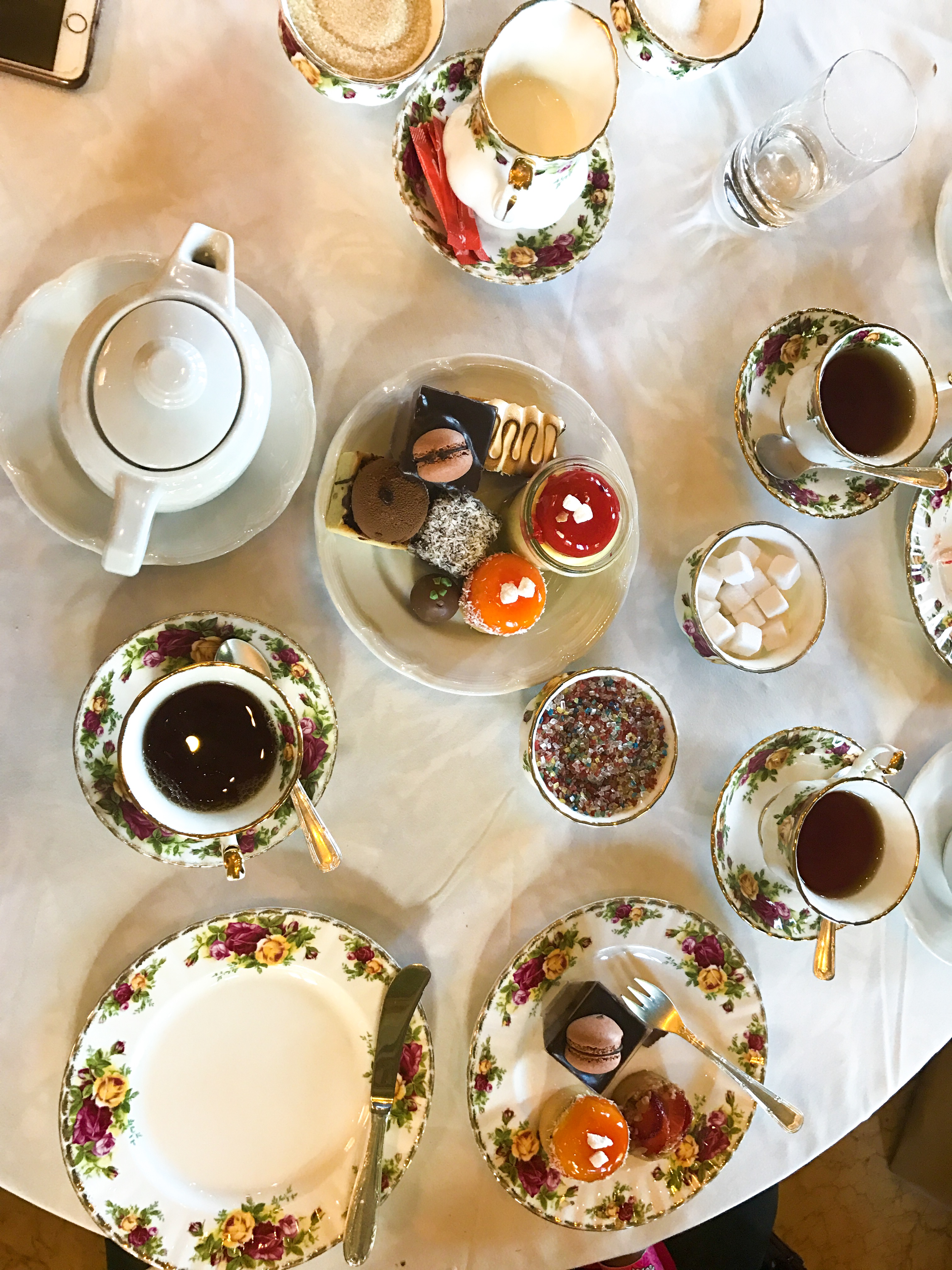 This tea set was so classic and it looked like something Queen Elizabeth might own in her several sets of tea sets …my mind often wonders to extraordinary places sometimes haha. 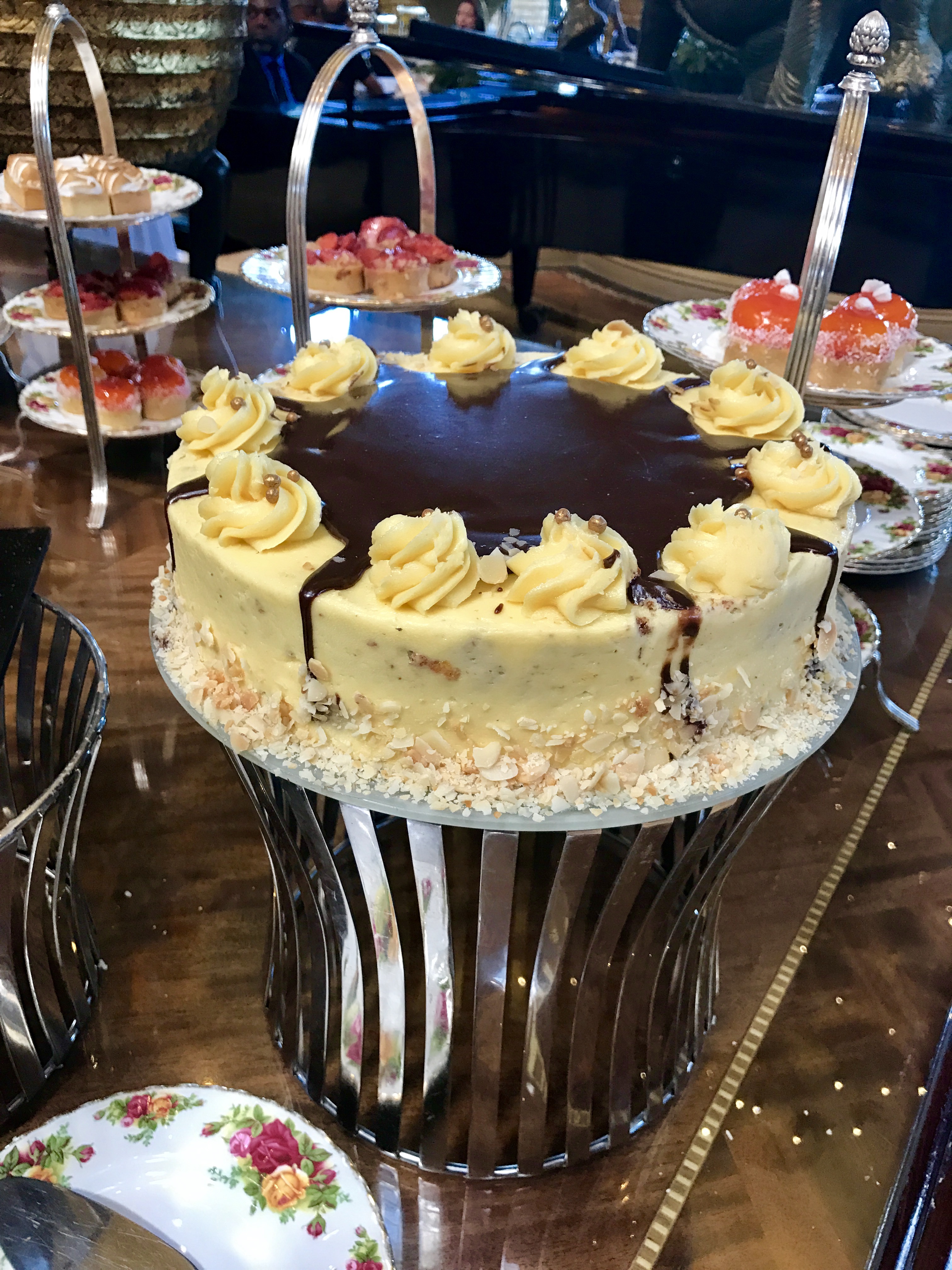 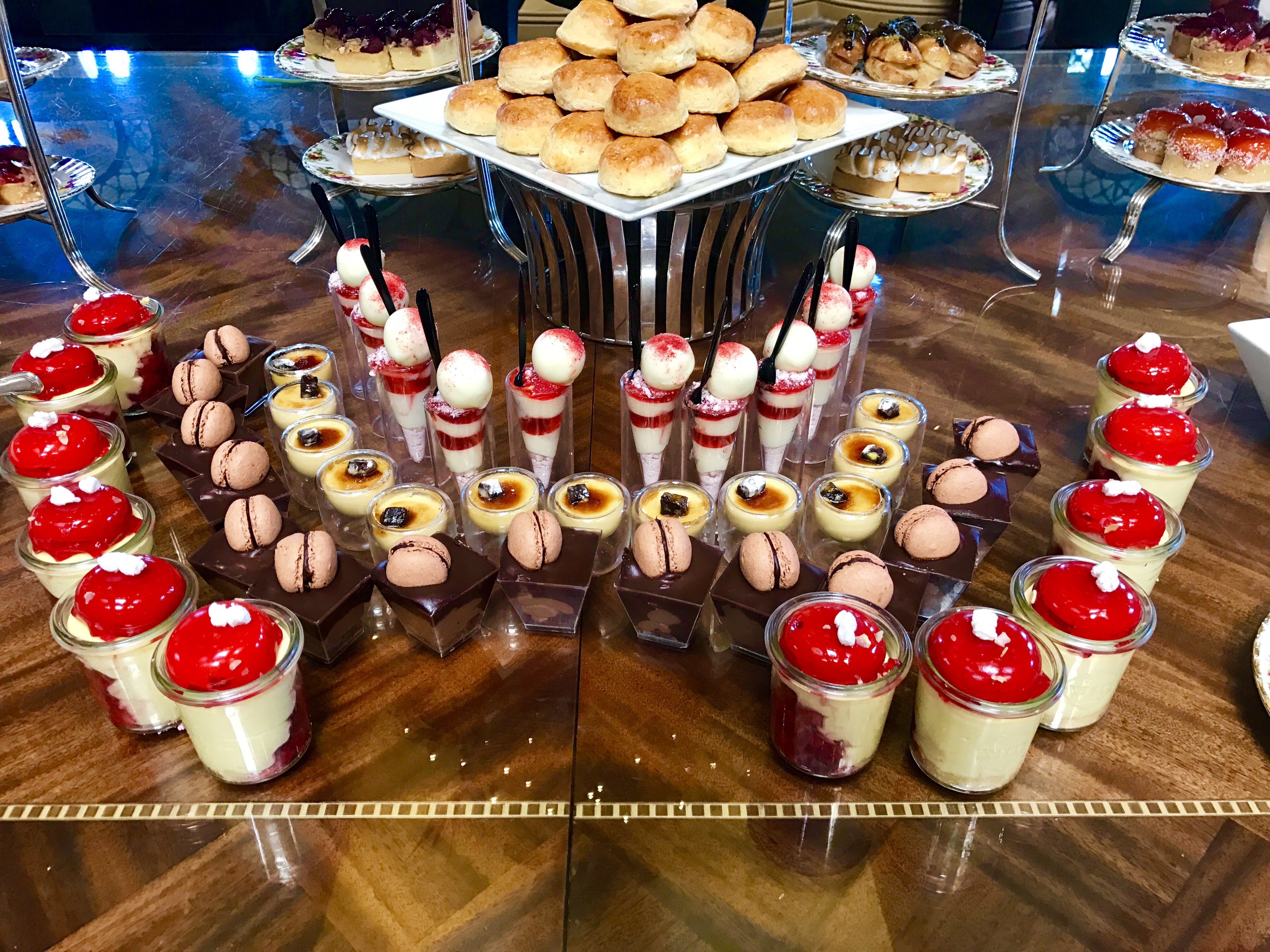 I tried to taste everyone of them, but I reached my sugar threshold too quickly. The cakes , the cakes oh the cakes. I was so sad that we did not get to try all these sweet treats because we got so full real quick and they were closing soon and we had to leave. Even though we were the last to leave we still couldn’t get take always haha.

We finally had some time to spare and we took a walk around the palace before we left. The beauty of this place is never ending. I will definitely be back for more.

Ladies and gentleman, and that is how you do Sun City in a day -like a queen. We thank Mama Africa for such a beautiful land and trip!

The 27th of September is regarded as World Tourism Day. In honour of the #TourismMonth, South African Tourism held #TravelWeekSA Hello, I am Mapitso. I am a lifestyle blogger based in South Africa. This blog is where I share all the things I love: travel, career tips and personal development, health and well-being content. I hope you will stop by again.